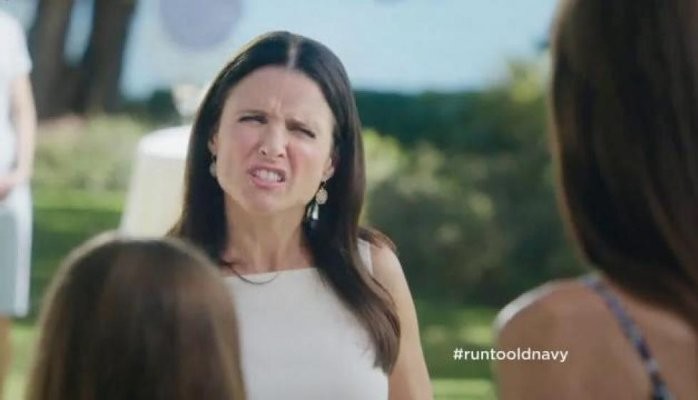 dating all the way back to 80s star Morgan Fairchild. Through the years we’ve seen stars, whose headlines read more like “Where are They Now,” have careers reignited with guest stints in oddball spots for the Gap-owned retailer.  Fast forward to recent years and next thing you know, you see comedian Amy Poehler, and recently none other than Julia Louis-Dreyfus herself pushing the product line.

Both of these women have more than earned their mass appeal playing quirky, likeable yet realistic people both onscreen and off. But Old Navy dials it up-and-in an extra notch, or twenty, with their latest spots, namely the spring installment that has Louis-Dreyfus playing an ex who spots her old flame at a wedding with his new (young and sporty) girlfriend.

What makes the #runtoOldNavy campaign work so well, and watchable for as many times as you’ll see it, is that Old Navy knows itself and audience…and Louis-Dreyfus knows her voice.

Quips like “I like this one. She makes you look fat” are delivered with equal parts disdain and charm, and are precision scripted and delivered, every time.

Major credit goes to Old Navy’s agency Chandelier Creative, purveyors of their print and broadcast work, who surely affected the outcome, hiring major talent like director Roman Coppola. Coppola, with credits like Moonrise Kingdom, masters thirty seconds just as well as a feature film. But it’s the writers who simply nailed the script, emulating the traits that closely mimic the familiar, incredulous characters like Elaine and VEEP’s Selina Meyer, with their obvious envy and tolerable amount of hate.

And all things ring true to form, ingredients that blend the delicious cocktail of celebrity endorsement. With a callous audience that’s been overexposed and oversaturated on fame and advertising, acing it can be near impossible. So congrats to Old Navy for hitting the celeb sweet spot.  Will their discount dresses follow?